Popular
Natural Alternatives To Viagra
MAN v FAT v The One Show
MAN v FAT Newsround 16/2/2018: How well do...
The Difference Between Testosterone And Steroids
MAN v FAT Football Launches in January –...
How to cut out alcohol for a weight...
How To Prepare For Flu Season
Amazing Losers Head to Head – The Two...
RECIPE: The not-so-dirty doner kebab
Prostate Health And Cancer Prevention Tips
Weight Loss

You’ve gone out with the lads/the other half/the kids (delete as appropriate) and your belly is rumbling louder than a jumbo jet on take-off. You’re walking down the high street and their attention has been grabbed by a brightly coloured fast-food restaurant sign and their eyes widen at the thought of a burger. Surely you can’t have a cheeky one…or can you? Life is about balance – sometimes we have to treat ourselves. It’s better to do it sensibly than to crack and wolf down the entire Pound Saver menu, right?

So here is part one of our guide to satisfying your cravings whilst keeping both your sanity and your calorie allowance intact and healthy: It’s the MAN v FAT Swap Shop, McDonald’s Edition!

You’ve taken refuge in the glorious Golden Arches and you want a Macca’s. No, that’s not right, you need a Macca’s. With your performance on the scales in the back of your mind and one eye on your calorie allowance, it’s worth remembering that the key to an (almost) guilt-free McDonald’s burger is knowing that less is more.

What are you getting? Let’s check out the usual suspects:

AKA the ultimate showdown. It’s a battle of texture (more sauce or more crunch?) but more importantly the number of patties in ya buns. There’s no messing around from either the QP or the Double Cheese. They’re both saucy, both with crunchy onions and gherkin so how do you choose between the two?

Well if the thought of having two burger patties gets your boat afloat then you are in luck. Believe it or not, the Double Cheeseburger, with its double helping of burger goodness, will save you 73 calories. It’s smaller, sure, but you get an extra burger which definitely makes up for it. And the fact that it’s slightly smaller works in its favour too: we eat with our eyes first and Cambridge University studies show that eating from a smaller plate can make you eat less.  So surely fooling yourself by having that extra patty squished in the box can go some way towards keeping you full and satisfied? 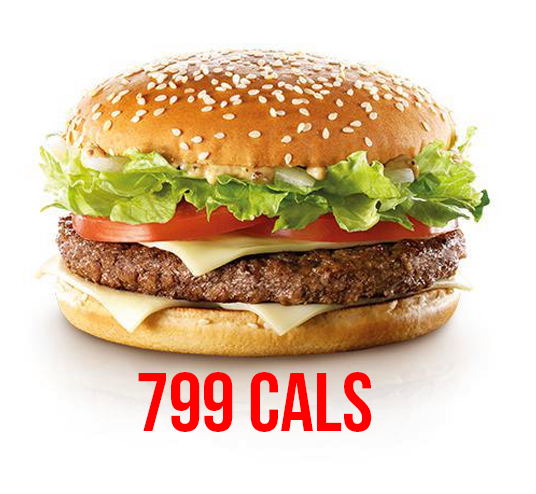 If a Big Tasty is what you crave, order it without bacon. Yes I know, a couple of rashers of bacon can make the bluest of days happy but I promise you won’t miss it from your burger. Plus, you only need to lick the streaky bacon from McDonald’s and it dissolves, it doesn’t satisfy for long.

Ordering a Big Tasty sans the bacon will save you 61 calories. Which may seem insignificant, but these small changes add up to big results. To look at it another way: 61 calories would allow you to sneak a fun size Milky Way into your day if you needed a sweet treat later on. 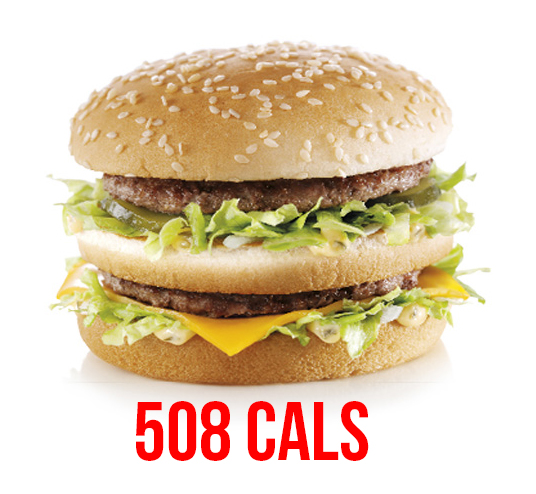 In my opinion, this is the most addictive of McD’s burgers. Ooey-gooey cheese and that signature sauce – nice, but naughty. If your burger must have ‘Big’ in the title, the Mac is the daddy with 291 fewer calories than the Big Tasty. Although seeing layers of patties and bread stacked high is tempting, no one needs three pieces of bread in a burger, surely. Let’s scale it down a little bit.

Back in March, McDonald’s brought out the Big Mac Jr (and the Grand Big Mac, but let’s ignore that one because it clocked up almost 800 cals), which was the Big Mac’s little bro, omitting the extra bread and extra burger patty but keeping all that gorgeous oozy sauce, saving you over 100 cals. Sadly, it was a limited time offer and they stopped serving it in March. But it inspired us to get a little creative with our burger – after all, the best bit about a Big Mac is the sauce.

Step 1: Order a smaller burger (but be careful, as looks can be deceiving. The Quarter Pounder has more calories in it than a Big Mac, so go for a double cheeseburger).

Step 2: Ask for a shot of Big Mac sauce on it. You can do this at the till (we’ve tried it a few times and have never known a server to refuse to put this through) or if you can’t bring yourself to do this, head to the self-serve screens that almost every McDonald’s has now. After adding the burger to your order, you can click on it to edit exactly what goes in it.

A shot of Big Mac sauce comes in at 50 kcals – a small number of calories for a big burger hit when you know the sauce is the sole reason you want a Big Mac.

The Big Mac vs Mini Mac – saving you not only calories but money too.

A cheeseburger with Big Mac sauce saves you 157 kcals – equivalent to half a tub of fancy new low-calorie ice cream (Breyers chocolate ice cream would be our choice) – now that makes a sacrifice feel worth it, doesn’t it? 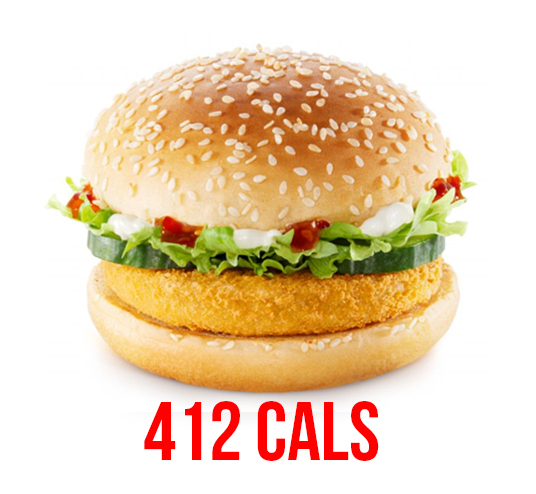 If your desire for McDonald’s stems from a need to hold some buns (ahem), try a burger with a leaner protein source like chicken or fish, or even go veggie to save on calories. A Vegetable Deluxe comes in at either 400 or 412 calories depending on whether you want it spicy or not, and a Filet-o-Fish will only set you back 329 calories – nothing fishy about that.

When it comes to chicken, the Chicken Legend with Hot & Spicy Mayo (519 kcal) is ever so slightly higher in calories than the Big Mac but it does pack in a little bit more protein (1g extra protein for 11 extra calories) which can make you feel fuller for longer. Swapping a Mayo Chicken Legend for a Legend with BBQ sauce (535 kcal) will save you 35 calories, just for a different sauce? Easy! 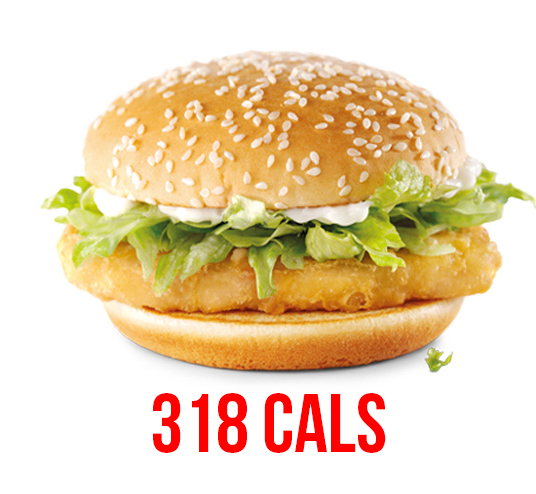 Swapping the BBQ Legend out completely for a McChicken Sandwich (388 kcal) or the Mayo Chicken (319 kcal) will save you 131 and 200 calories respectively.

What about nuggets? With 16g of protein and 259 calories per portion, they’re not awful, but they are addictive (believe me, I speak from experience) so if portion control isn’t your strong point, perhaps put down the nugs. Plus they probably won’t keep you feeling full for too long as they don’t have as much ‘bite’ as some of the other menu items. Having said that, Usain Bolt was basically a walking chicken nugget during the Beijing Olympics, so they’re probably the key to winning gold medals. Probably

Don’t assume wraps are a healthier option. Some wraps have very similar calorie content to the burgers (for example, the crispy BBQ Chicken and Bacon comes in at 500 kcal) so ordering one just to ‘be healthy’ doesn’t work. But if your preference is for a wrap, go for grilled rather than crispy chicken (saving about 150 calories) and skip the mayo – the Hot Peri Peri Chicken Wrap comes in at 353 cals. 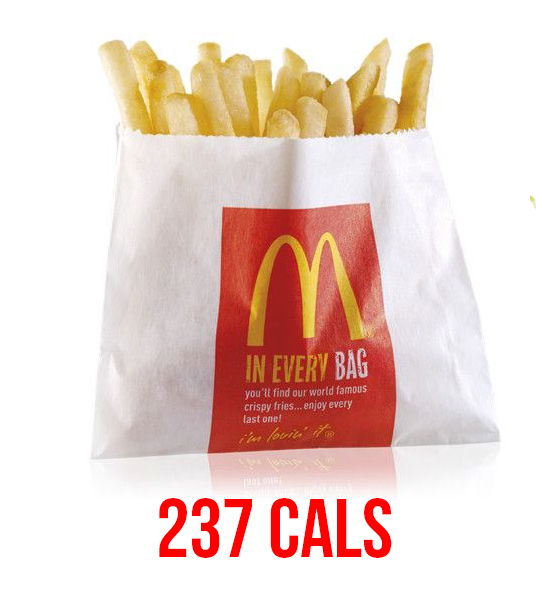 A bit on the side

And if you’re thinking that a trip to McDonald’s isn’t complete without a box of hot, salty fries – we hear you. Do you really need them? We’re betting that once you’ve got your burger you won’t miss the fries, but sometimes they’re just what you want (it’s the smell that gets you, I swear). A large box is 444 calories, whereas a small bag adds 237 extra calories to your meal. You may scoff at ordering a small portion, but a taste is all you need.

If your halo is weighing down on you particularly heavily, you could always go for a salad. Cut the sniggering! The grilled chicken salad is a measly 133 calories, so if you’re really strapped for calorie wiggle room it’s always an option. Not a particularly fun one, but an option nonetheless.

And as for drinks? Stick to Coke Zero – spending that extra 170 calories on a Classic Coke is so not worth it.

So there you go – you can still be (ba-ba-ba-ba-ba) lovin’ it without sacrificing your hard work. What’s your favourite McHack? Let us know over on the forum and tell us what else you’d like to see given the Swap Shop treatment.

7 things we learned in April

How to have a healthy Easter

How to have a healthy Easter

How to tell people you’re on a diet...

7 things we learned in April